Long, flowing hair makes women feel more feminine and sexier. For women who want to make their hair thicker or longer immediately, they use hair extensions, and high quality REMY hair extensions will provide a stable performance and longer lasting.

We all know virgin human hair, which has never been dyed, straightened or blow-waved, is the best raw materials for producing high-quality hair replacement products, and is so valuable it's called Black Gold. And MHOT also knows where and how to find those best hair materials. 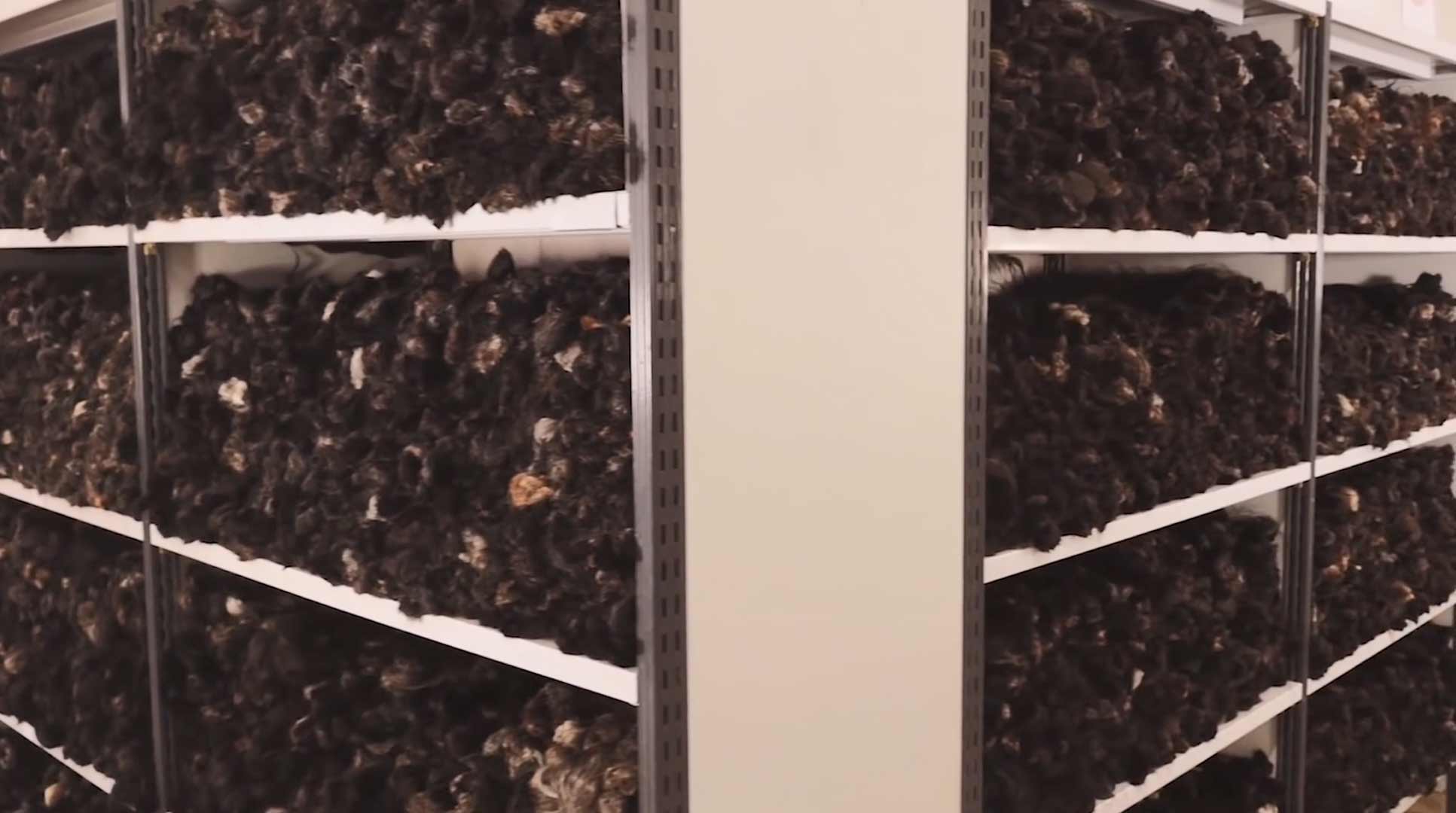 Within the hair replacement industry, it is widely accepted Indian hair, not like hair comes from China, is the most similar in texture to Caucasian (European) hair. But for the people who are looking for colors other than dark brown or black, the color of Indian hair is not suitable for them. If we bleach them to very light shades in the chemical solution, which will cause severe damage to the cuticle layer of the hair shaft and finally short the lifetime of finished hair products.

In this case, to make sure intact cuticle we will choose Caucasian (European) hair as our raw materials, even if we need a very light shade, we will handle the hair materials in the mild chemical solution. Now we can make sure perfectly match will be achieved both in texture and color, and more importantly, the lifetime of finished hair products can be guaranteed.

For the raw hair to become the high-quality hair extensions women are delighted to wear on, all our raw materials are handled mainly by hand, which is very time-consuming. Our skilled craftsmen have played a crucial role in the whole production chain. First, our hair is washed with a mild shampoo to prevent damage that happens on the cuticle layer from harsh chemicals, then combed, and finally grouped by shades and lengths. Then, to make sure the cuticles of the hair all follow the same direction during subsequent processes, each strand needs to be sewed on to strips of fabric by our workers. 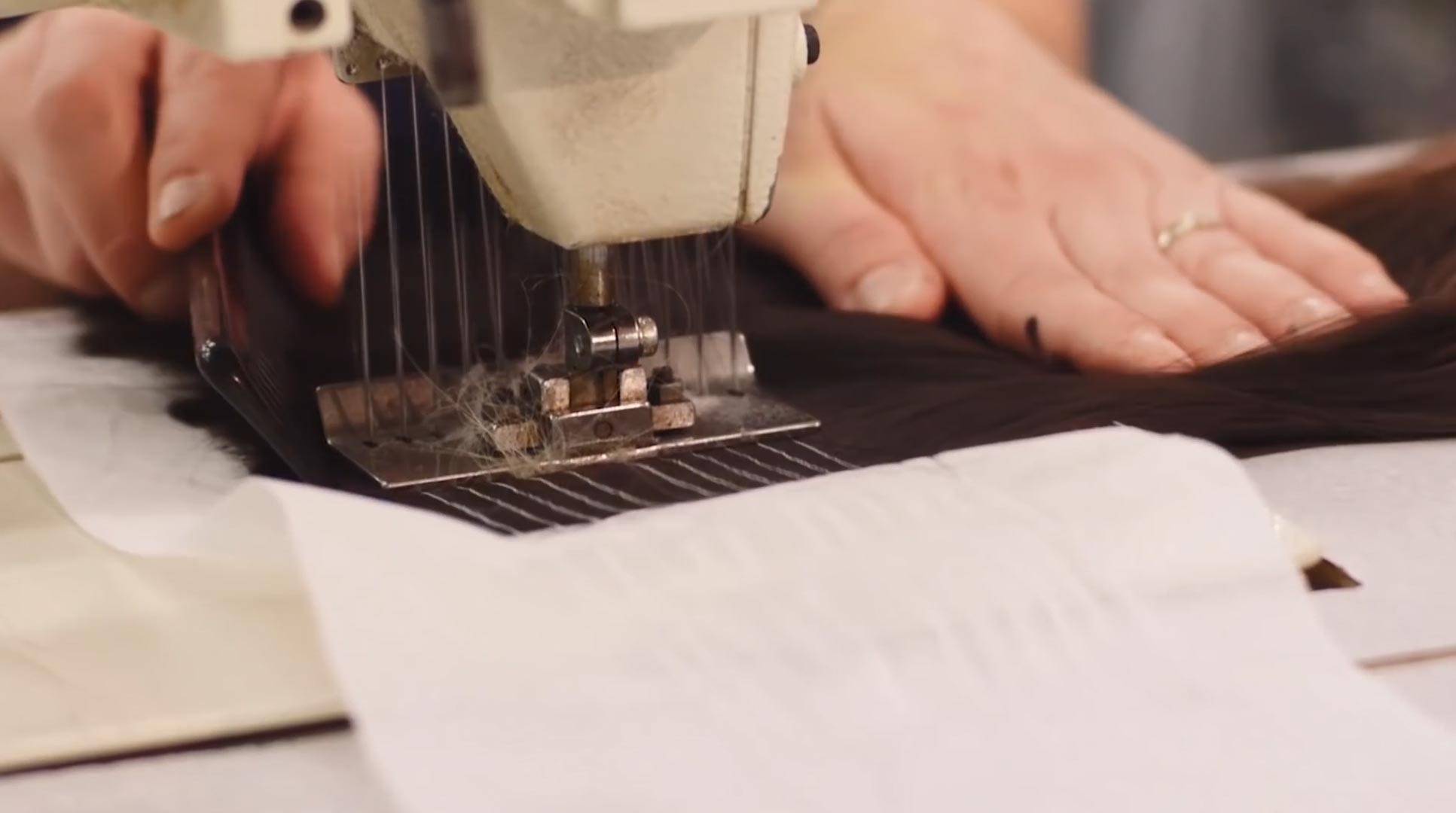 You see, our hair is an elastic fiber that can be subject to strain, which means deformation will happen on it before hair breaks when stress is applied. As a manufacturer who values the quality of remy hair extensions, we set up tests within our quality control process to measure the tensile strength and elasticity of a single hair shaft a few years ago. 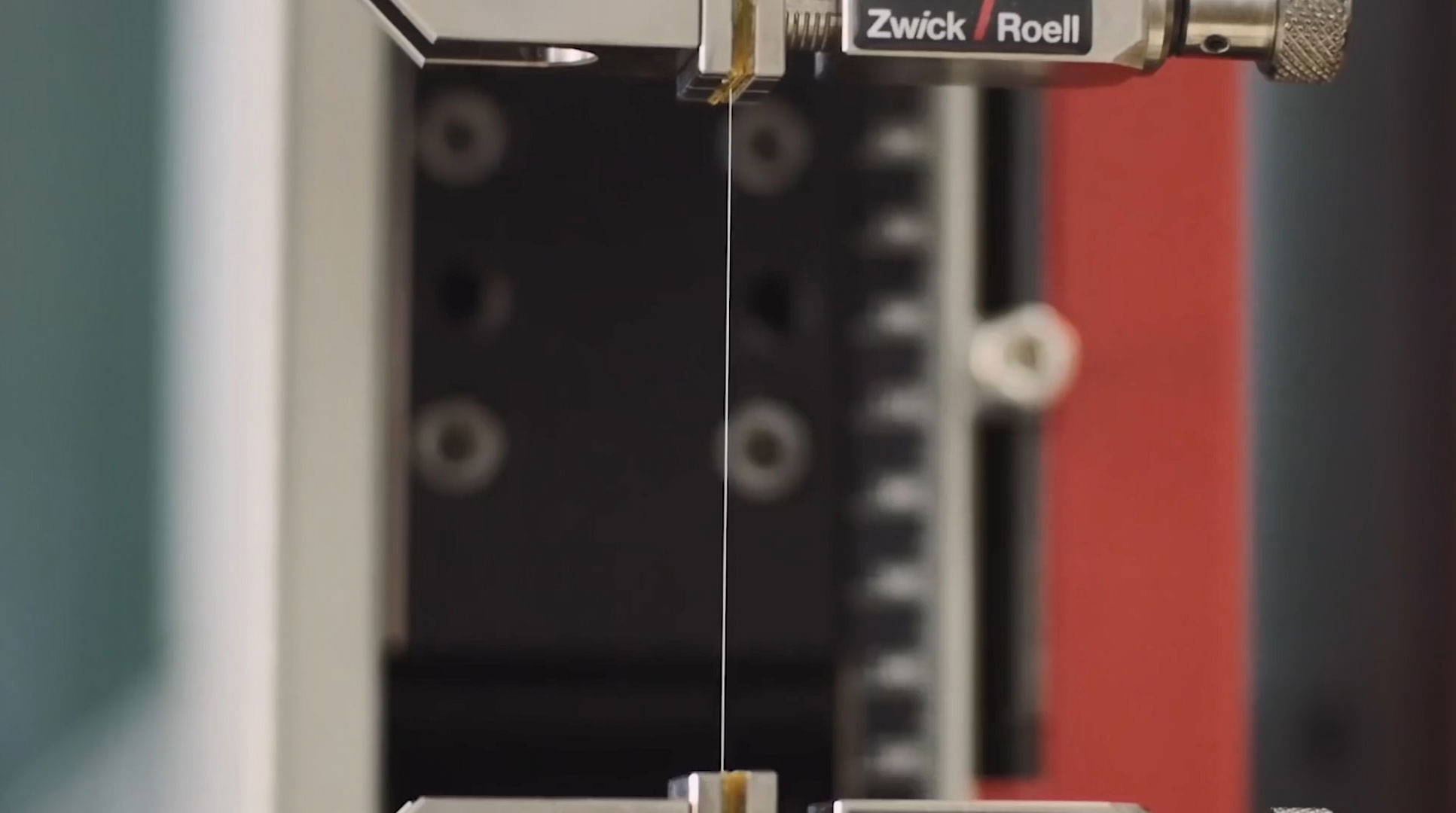 What we want to measure is before a strand of hair of our hair products reaches its breaking point how long and how much force is required, after that, we will compare the result of measurement with the measurement of normal healthy hair. This tensile strain test mimics the act of combing the hair in real life, and also give us a guide in the quality check of our hair products ( clip in and tape in remy hair extensions).

Human hair shaft is the part of your hair that can be seen above your scalp. It is made of a protein called keratin, compacted and fused together and it includes three layers: the cuticle, cortex, and medulla. The most outer layer is the cuticle, this hard shingle-like cells that overlap each other to form a protective layer and point toward the ends of the hair, which protect the inner structure of the hair shaft. When you straight or curl your hair with heat tools, or soft or dye your hair with chemical products, that will cause damage to the cuticle layer of the hair shaft, weakening the integrity of the hair. 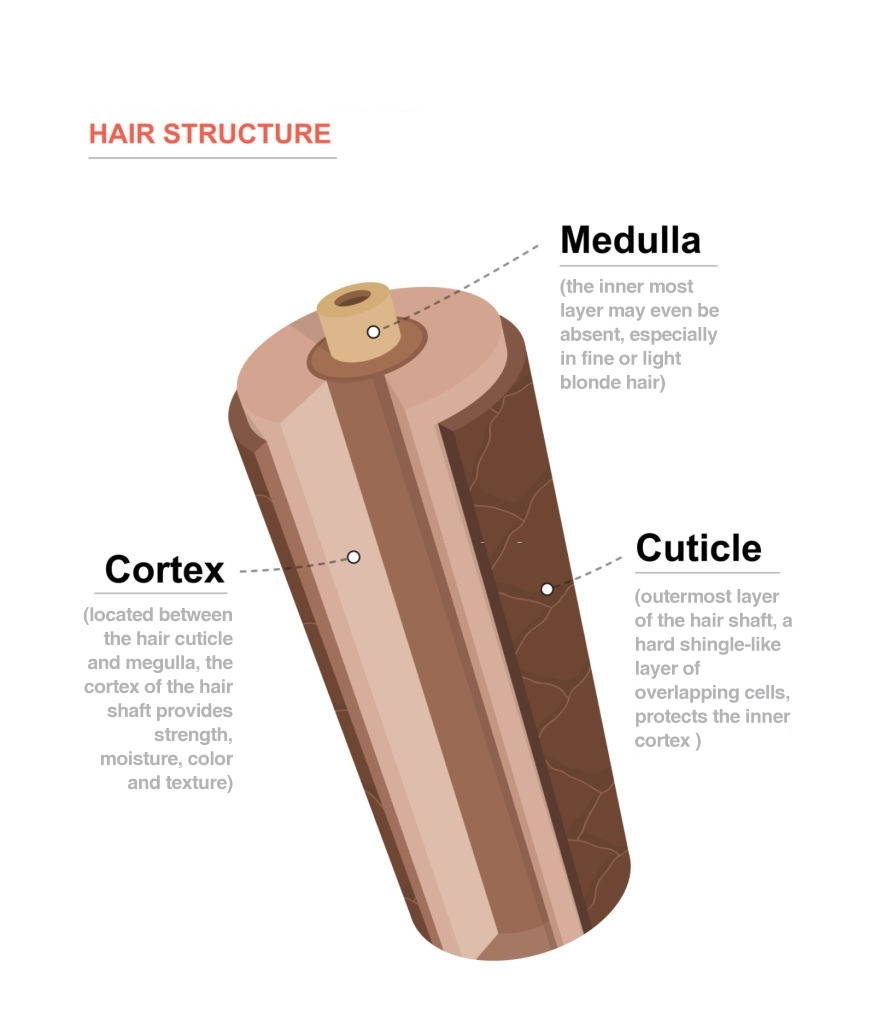 First, our hair will be soaked in the osmosis baths for 15 to 20 days, which is called depigmentation. During this process, the fish scale-like cells of the cuticle are raised, not eliminated. When the cells are raised, the ingredients among the osmosis baths can enter into the middle cortex layer. This is very key for our remy hair extensions can keep its natural shine and elasticity. The time the hair remains in the osmosis bath primarily depends on the desired color: the lighter the hair extensions, the longer they undergo depigmentation.

Once the hair has been in the osmosis bath for the required time, the next colored process, also referred to as pigmentation, is started. This process is just as gentle as the depigmentation. The space in the middle cortex layer of the hair resulting from color pigments in this layer being extracted during the depigmentation process can now be filled with the desired color particles.

After pigmentation, the next process is hair blending, which is an innovative technology invented by MHOT. In this process, strands of hair with different shades are carefully blended by hand. If only one single color exists in the strands, the transition between the natural hair of customers and the hair extension would be obvious, and the result look would be unnatural. Purposefully blending different shades in one strand will yield a very natural looking. Thanks to the hand-blending procedure, which enables us to obtain an abundant color range. 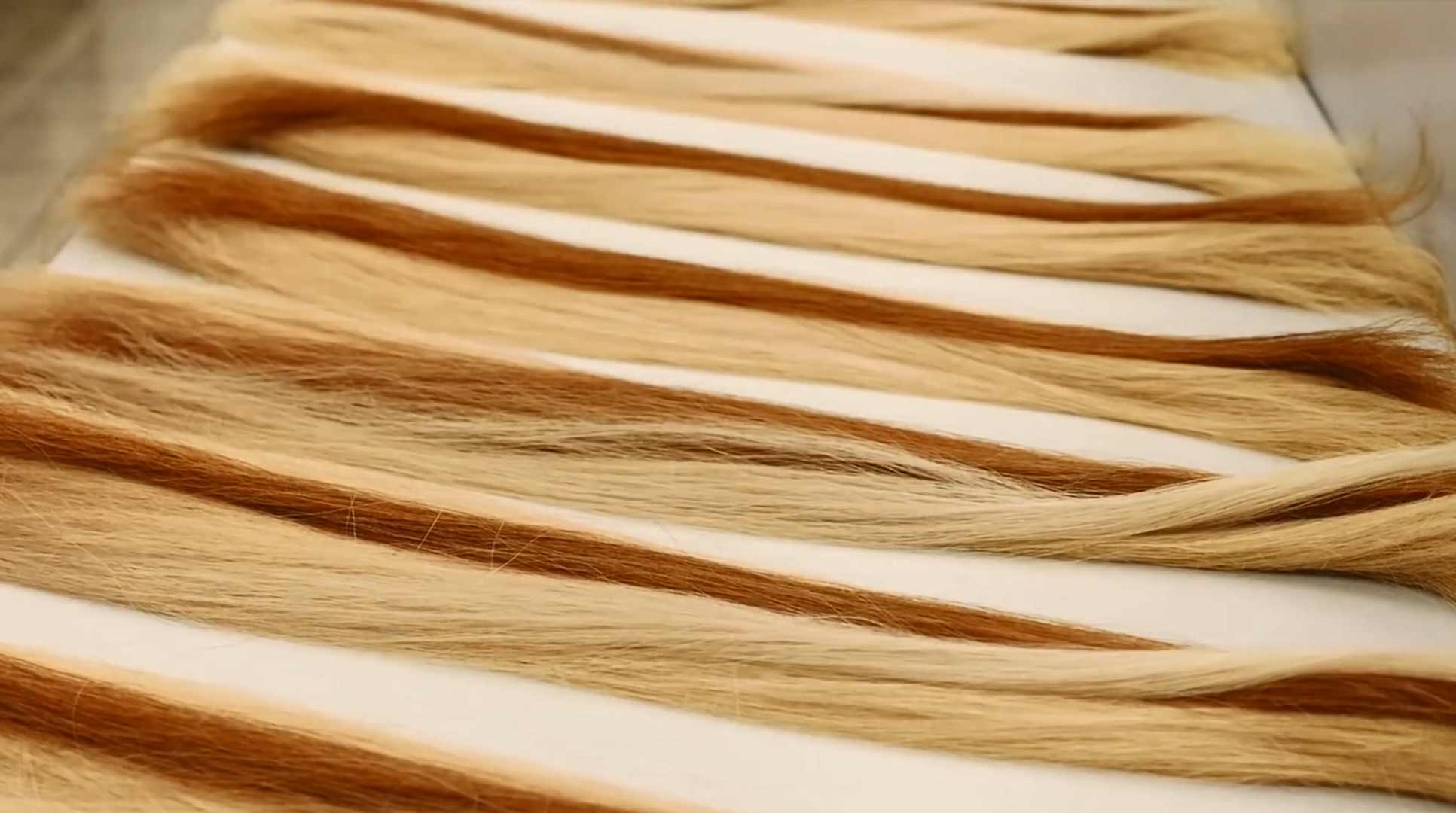 Shedding is the most concerning issue of human hair products. To make sure the problem will not happen on our products, we use quadruple weft machines instead of triple head machines. For completely solving the shedding issue, we also improve the process of wefting hair by double gluing/wefting.

Your cart is currently empty.